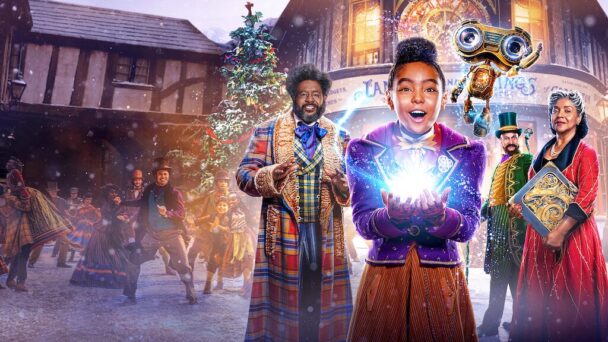 Decades after his apprentice betrays him, a once joyful toymaker finds new hope when his bright young granddaughter appears on his doorstep.

This fantasy movie musical is a visual and auditory feast. The characters, set, and costumes are full of imagination and color, and the story full of emotion and import.

The setting is a fantasy Dickensian steampunk. The cast exceptionally strong and nearly all-Black

The film begins as a new Christmas story told by a grandmother from a huge book with intricately spinning gears on the cover. It is about a toymaker named Jeronicus Jangle. Jangle has a whole notebook filled with designs for his enchanting toys and a store called Jangles and Things filled with his inventions and happy customers.

He also has a devoted wife, a daughter, Jessica, and an assistant named Gustafson. The story opens as he is waiting for one last ingredient to bring his greatest invention to life. When the ingredient is added, it brings to life a little mechanical bullfighter with a very big ego. Jangle is overjoyed, planning to manufacture one for every child in the world. But the bullfighter is arrogant and selfish. He wants to be the only one. He persuades the assistant, Gustafson, to steal him and the notebook of designs. Feeling betrayed and disheartened, Jangle loses everything over the next few years.

Later, we see Jessica, his daughter is grown and has a daughter of her own, named Journey. She comes to stay with Jangle just before Christmas. At first, he is grouchy and stand-offish. But it turns out that she has a gift for inventing, too, and Jangle’s inspiration begins to return. She creates a magical invention that has the power to change their lives forever.

Creator God, you have made each of us and given us each special gifts. Our imagination is one of those gifts. Sometimes we can invent stories and toys and songs and dances. Help us to see them as gifts from you, gifts that include a sense of your presence and love, gifts that can bring us joy and pleasure, gifts we can freely share. At Christmas let us remember the many ways you gift us, the ways in which the magic of your love fills us to overflowing. Help us to spread the magic of love to those around us through the gifts of imagination and creativity.

For we pray in the name, the one who created all things…Amen